You  were all brilliant... fantastic show.. enjoyed every minute of it and I have to  say Lesley's and Sue's dancing had me in stitches.... I hope that word gets about  tonight and tomorrow and you sell out.. you should do...... Thank you so much  for making my day a better one!  (MT Letcombe Regis)

Brilliant show. Well done to all. We really enjoyed  it.  (DL Faringdon)

Well done, such a brilliant performance! Thoroughly  enjoyed it.  You are all stars.x  (FW Faringdon)

You  guys were all amazing. Fantastic show! Time to give up the day jobs and start  touring coz I want to see it again! (AT Wantage)

Well done all, the show was amazing and what a great  set! Absolutely loved it :-) xx (AT Wantage)

It was amazing! Well done everyone! x (EB Shellingford)

I hoped I would see you today so I could let you know I thought  Friday evening was fantastic!  I will be honest and say I was blown away with how professional the whole production was, from your acting through to props, lighting and sound.  (DCC Wantage)

Just  wanted to say how  much I (in fact all my group) enjoyed ‘The Rise and Fall of  Little Voice’ on  Saturday.  You  did such a great  job to direct as well as act so brilliantly.  Your Daughter  Grace has such a  great voice she seemed made for the  part. (JC Wantage)

Loved it all!  Well done – sorry I was not able to stop to say thank you in person. Please pass onto the rest of the brilliant cast. (BJ Wantage)

Really enjoyed the show tonight! Congratulations! You were particularly great,  it's a tough part and thought you were fab! (SB Wantage) 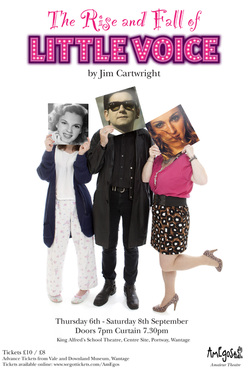